My Nessie amigurumi consumed most of my attention during the week I spent working on it, but then after finishing it I suddenly checked three other things off my list. First, I finished my semi-secret project, a pattern from Beth Doherty's Amigurumi Super Happy Crochet Cute. No pictures or details at this point because I'm thinking about making it a present, but I will say I'm happy with how it turned out. Right after that, I finished off the Eternity Scarf I started as a bus-trip project... and put it on, and promptly realized I have no idea how to wear a bulky cowl. Fortunately I have about eight months to figure it out, since this winter seems to be pretty much over. 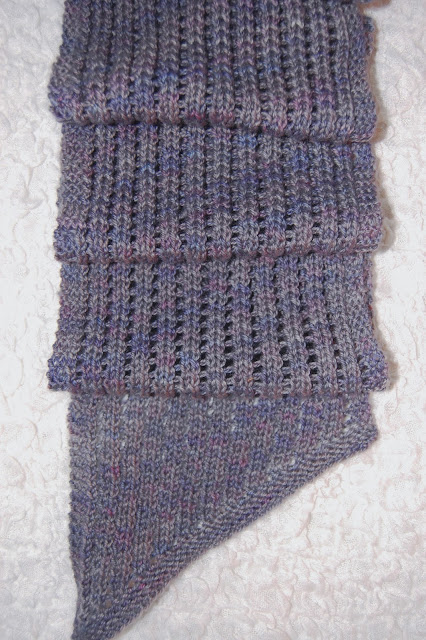 I also finally got around to blocking something! This is my Bias scarf, which I finished in December but never wore because it needed blocking. So yes, it did take me three months to get over that small hurdle, and of course it was a pretty simple project. I do think I needed to be a little more aggressive with the blocking, because I want the scarf to look more like mesh than ribbing. But, with the ridiculous summer weather we've been having, getting a scarf ready to wear is not a priority.

And of course, I just started and finished a hat in the past few days (another project that will have to wait for next winter to get any use). More about that later.
at 10:20 AM