Last week, I finally got around to casting on Villeray. The pattern has been in my queue for several months and I bought the Neighborhood Fiber Co. yarn I mentioned a few posts ago for this scarf, but in the midst of moving and such, I didn't have the mental energy to start a new lace pattern. But, it's really not that hard. I'm probably getting way ahead of myself, since I still have to count after I finish every lace row to make sure I didn't forget a yarn over, but I think maybe lace will be my knitting "thing". It is what attracted me to knitting, after all.

As usual when I start a new pattern, for the first couple of days all I wanted to do from the moment I got up until I went to bed at night was work on this thing. And then this happened: 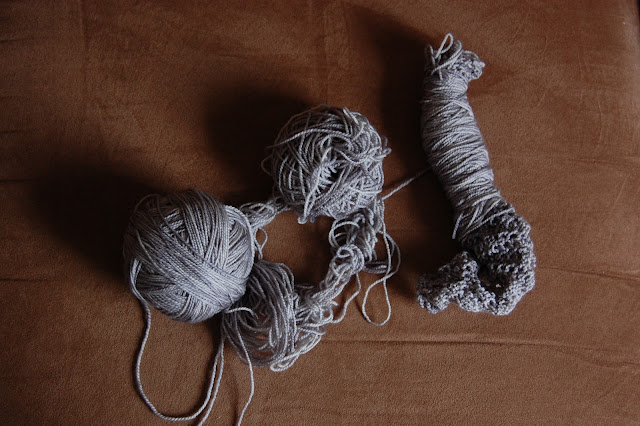 The middle of the ball was a complete wreck. So wrecked that I had to re-wind it from both ends to get it fixed, temporarily turning my knitting into a scary bird-as-spider-prey looking thing. But after a few hours of that, I'm ready to go again.

In the meantime, I finished my rick-rack scarf, which I will not post a picture of here because I couldn't get a good one at this time of the evening. I'm not especially thrilled with it so I think I might donate it. It was a nice tv project though, and a good way to keep burning through that irritating purple yarn - now I only have most of one ball left. 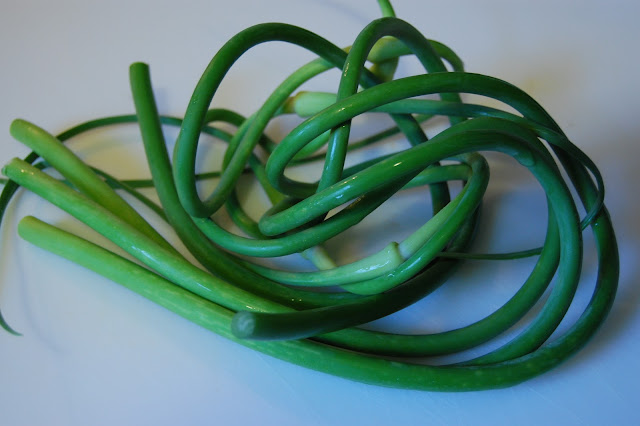 scapes! Today I made the edamame hummus and compound butter, as planned, using two scapes in the hummus and three in the butter. Both are very tasty, based on my sampling.
at 8:04 PM