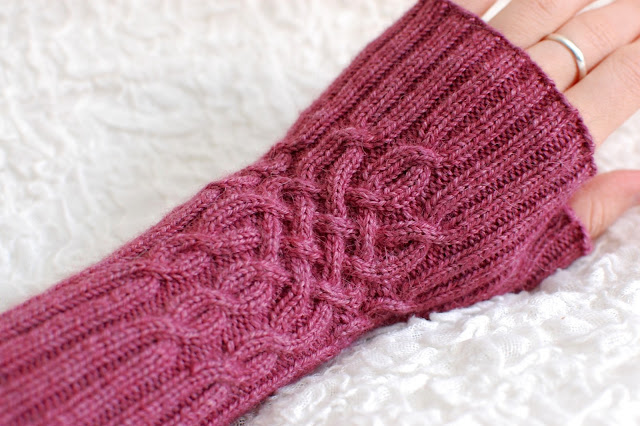 I finished these a while ago, but it took me almost as long to photograph them as it did to make them. It's really hard to photograph mitts in a way that looks natural, especially on your own hands! This picture will have to do for now, because I wanted to finally do a finished-object post about these guys.

I haven't yet suffered from Second Sock Syndrome, but I struggled with Second Mitt Syndrome when I was making these. Although I didn't spend much time actually working on them, it took me more than three weeks to finish up, and most of that time was just dawdling around about starting the second one. That middle section, where the whole thing is cables, is a little overwhelming. But, in the end, it's worth it!

Since then, I've been working on a handful of different projects, all with deadlines and/or intended as gifts, so that's been keeping me busy. I have some more FO's, but they need to get to their recipients before I can post them here.
at 4:02 PM