Raindrops on roses and zucchini pizza 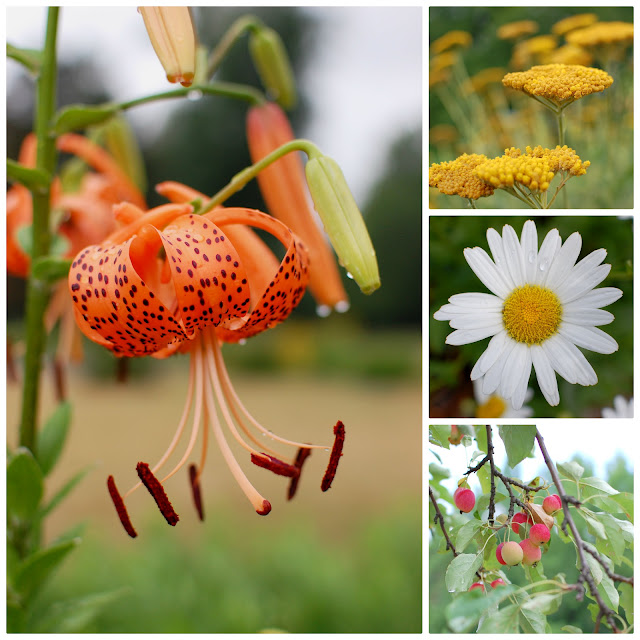 On Saturday, I was feeling restless but the weather was not cooperating with my original plans of going to the botanic garden. It had drizzled all morning and the forecast was for scattered storms the rest of the day, so it seemed like outside stuff was not a great idea. The idea of being inside all day was making me stir crazy, though, so we decided to take our umbrellas and go to the park. And of course, it didn't rain at all, and was even hot and sunny by the time we left. I was a little disappointed, actually, because once I came around to the idea I was looking forward to walking around and taking pictures in the rain.

Dinner on Saturday night was zucchini pizza, based on this recipe but with my own substitution of caramelized onions for the olives. It was delicious, and fit in well with my "unhealthy" theme for this week's CSA box: turning beets into brownies, red cabbage into a side dish for sausage and spaetzle, and peaches into cobbler à la mode.

Although this picture is a bit deceptive. I don't think my scarf will be long enough with just one skein, so after I finish this one off I'll probably keep going for another eight inches or so. But it is exciting to see the end of the skein coming up. My goal is to finish this project by July 27 (shouldn't be a problem) because after much confusion and dithering, I decided that I wanted to participate in the Ravelympics Ravellenic Games this year. I'll be knitting my first shawl! We'll see how that one goes.
at 5:17 PM