My dad had one thing on his Christmas wish list this year, which made it a little tough to shop for him. Coupled with my perennial worry that I'll buy people all the same presents that somebody else got for them, the obvious solution was to make him something, but it took me a while to arrive at that conclusion. The year I first learned to crochet, I made him a scarf that he and I were both happy with, so I think I sort of permanently crossed him off my gift-making list: he's not an accessories kind of guy and since he liked the one scarf I made, it seemed redundant to make him another one. Plus, while there are some patterns for crocheted hats and mitts that look nice on guys, I was not so much into making garments, and I do think crochet in general lends itself better to more feminine designs (or stuffed toys, also not really up my dad's alley). 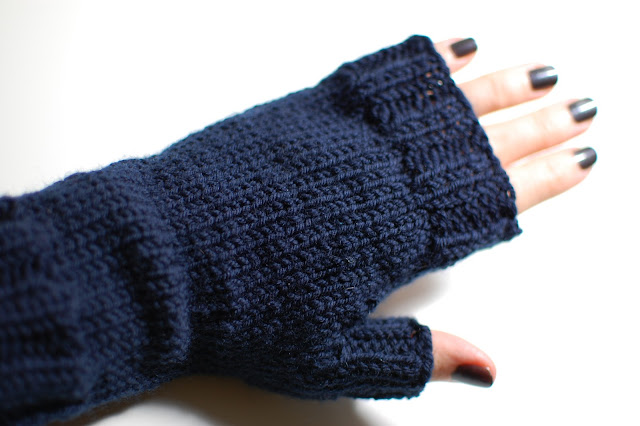 I don't want to say that knitting is "better" than crochet, but it has expanded the possibilities of what I can make for somebody, because I do think it's a lot more versatile. So, since the mitts I made for my boyfriend were so quick and easy and well-received, it seemed like a great present for the dad who has too much of everything and doesn't particularly want anything.

I used a different pattern, Peekaboo Mitts, and cast on a few more stitches to make them a more comfortable fit for man-hands. Of course, me being me, what should have taken just a day or two ended up taking a week because I encountered something I didn't know how to do, messed it up, redid it, tried other experiments, considered them failures, and (I think this is one of my stupidest knitting mistakes so far) decided to rip out and redo the thumb on one mitt, did so, realized I had gone after the wrong mitt, groaned, knit it back up, ripped out the thumb on the other mitt, then realized I had been right the first time. In short: I am still an idiot when knitting.

But! My dad has a handmade Christmas present and I'm happy about it. And someday I'll remember my troubles with a perfectly simple little knitting pattern and laugh. I hope.
at 9:26 PM