My mom had a milestone birthday this year, so I wanted to make her an extra-nice present. She mentioned that she would like a shawl or drapey scarf, and after looking over a bunch of Ravelry links I sent her, she picked out a few favorite patterns, including Horai. Since she especially liked the smokey gray color in the pattern pictures, I decided to make it using Knit Picks Aloft in a similar color.

I'll admit that knitting this was a bit of an ordeal. Using mohair for the first time made me a little nervous, but that turned out to be the least of my problems. Although the pattern wasn't difficult, it was hard to see the stitches as I was working, so more than once I was knitting along happily only to discover that a dozen rows back, I had accidentally picked up too many stitches when making a "flower" stitch. Aloft is pretty forgiving of frogging, I found, so it's probably a good yarn for a first mohair project. 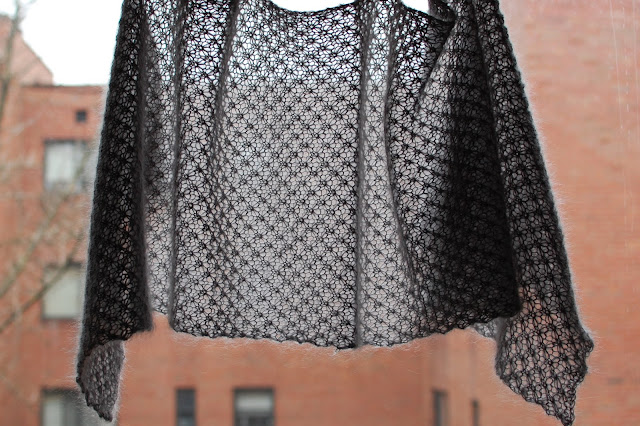 The main difficulties I had, though, were two problems I've had with my knitting since the beginning: my insanely tight tension, and my tendency to make extremely poor needle choices. This shawl really needed to be worked loosely, not only to get the nice airy, lacy effect, but also because the motif involved a lot of working multiple stitches at a time. It would have been far less physically challenging if I could control my gauge better. And that problem was compounded by my buying silly needles and then stubbornly continuing on with them. Obviously I should have bought at least one size larger than what the pattern called for (I didn't) and they should have been long enough that I could hold them firmly while working through the fiddly bits of this pattern (they weren't - they were 16" fixed circulars, which gave me about two inches of needle to actually hold on to).

And, for some reason, my Horai turned out wider and shorter than the pattern indicated, even though I thought I was following it exactly. 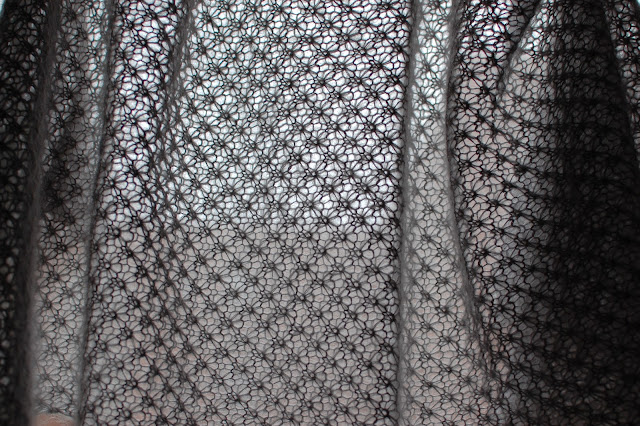 Still, I'm not unhappy with how the shawl turned out. The pattern is beautiful and it really works nicely in the mohair, and I was glad to give it to my mom as a birthday present. I do wish, though, that I had been a little less stupid about its construction, because I could have made it a lot easier on myself.
at 10:52 AM