When we were planning our trip to Japan, I was a little daunted by the amount of time we'd spend travelling. Obviously, flying all the way from the east coast of North America takes many, many hours (half a day, in fact). Then, once I added in getting from our apartment to the airport, from our local airport to Toronto, our layover there before getting on the plane to Japan, the trip from Narita into Tokyo, doing all that in reverse coming home, plus several hours on the shinkansen traveling around and back to Tokyo... I was exhausted before we left. Clearly, I needed a good travel project.

A good travel project, for me, is something simple enough to put down or pick up again at any point, but not so simple that it bores me or that I'd feel embarrassed explaining what I'm working on if someone asked. That kind of project, I think, calls for really nice yarn to keep me interested and produce something exciting despite the easy construction. My cowl that I made in September, as I mentioned, was perfect in that sense. 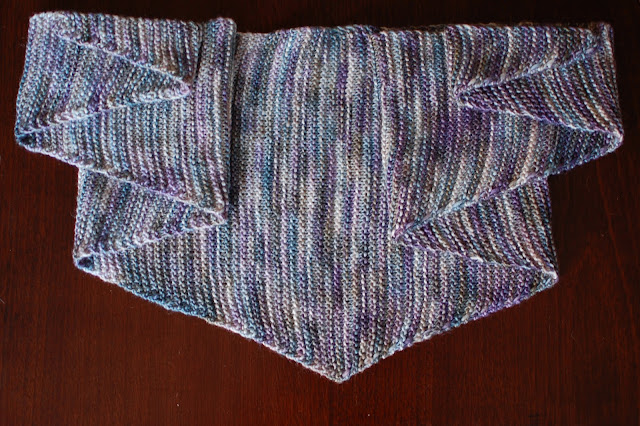 For our Japan trip, I decided to make a Baktus scarf, using some Manos del Uruguay yarn that I bought on our trip to New York in February. The pattern couldn't be simpler, and the yarn was crying out to be used, after I considered and then abandoned several other projects for it.

I was pretty sure I might end up finishing the scarf before the end of our trip, since after all, garter stitch and 300 yards of yarn doesn't last too long, even if I was planning to do a lot of sleeping and looking out of windows while we were travelling. Really, I only got about 10 inches of the scarf done on the whole trip, and most of that was on the shinkansen. I just didn't find myself in a knitting mood very much, which was fine. It was nice to take a break from everything. 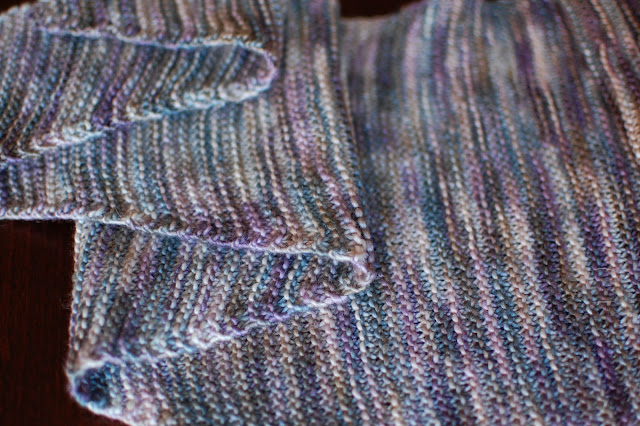 I did finish up the scarf pretty quickly once we came home, though. Although I was worried that it wasn't really long enough, it magically turned into just the length I wanted after blocking. I really love blocking.
at 11:45 AM