Recently I've been in that mood where I dump out my stash boxes and touch all the skeins and stare and plot and then tuck everything away and worry about having too much yarn. When I'm in that mood, crochet is wonderfully soothing and satisfying, because it eats up so much yarn and goes so quickly.

I can't get enough of that super-cute T-rex pattern that I posted about earlier, so when my grandmother requested a new critter (I've showered her with amigurumi in the past), she got a dino, of course. It was a good opportunity to pull something interesting out of my acrylic stash, and I am very pleased to report that one of my Red Heart skeins from my early crocheting days is now 100% used up. 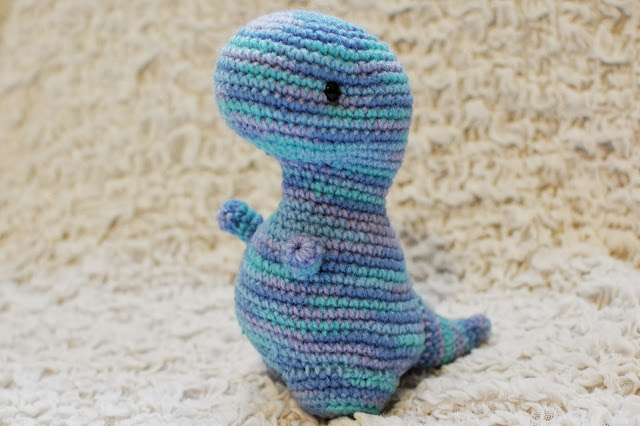 I actually ran a little short on yarn, so I modified the dino pattern slightly by skipping several rounds at the bottom of its body that were not used to increase or decrease stitches. Its tummy is a little less rotund, but it's still nice and chubby. Although this yarn was a bit brutal on my fingers, I do really like the colors, and I'm glad its final incarnation was this cute little dino. (It also became a dragon and a little crab and a little fish.)

Earlier this year I bought a skein of Michaels' house brand yarn, Loops & Threads, in a leaf-green color, because it seemed like a good idea at the time. This is actually a very decent acrylic, but I had no idea what I could do with it, especially since I probably have more worsted acrylic in green than any other color. So then I decided to make something for my cat. Of course.


I had an idea to crochet a popcorn-stitch rug to put under Juniper's litter box, to help collect the litter that she tracks around. Tamara Kelly's Blackberry Salad Striped Baby Blanket is a free pattern, and while I felt a little weird modifying a baby blanket pattern to make a bathroom accessory, it worked really well. I burned through the entire ball of Loops & Threads, plus a few other odds and ends that looked nice together. And the rug serves its purpose (when Juniper decides to exit her litter box from the front, which she does not always do, because she is a cat). I guess it's strange to get excited by the sight of lots of cat litter trapped in something I crocheted, but hey, it's doing its job.
at 10:30 AM