Earlier this year, I joined my first yarn club: GnomeAcres' Many Seasons Mini Skein Club. I am a fan of GnomeAcres yarn and of tiny things, so I have really enjoyed getting a bundle of cute little skeins every few months.

My stash anxiety won't let me just hide new yarn in a bin to marinate - I ponder what to make with it until I have a project planned out, even if I'm not going to start for months. Almost as soon as I signed up for the mini skein club, I decided I would make a Mini Mania Scarf. My first club shipment came and I happily got started and then... I wasn't as happy any more.

After long-tail casting-on a billion stitches (using both ends of the skein to avoid real misery, but still not very fun), I got a few rows in and decided that the needle I was using was too big, and the linen stitch wasn't suiting the yarn as well as I wanted. Disappointed, I ripped it all out and hid my spring mini skeins away, and when my summer shipment came I wasn't sure what to do with it (for me, this is unsettling).

As it's started to feel more like fall, I decided to give the mini skein scarf another try. This time I used a crochet cast-on and a smaller needle, added a black border to the edge of the scarf, and I'm doing four rows of each colorway so that each one stands out a little more. And now I like it! 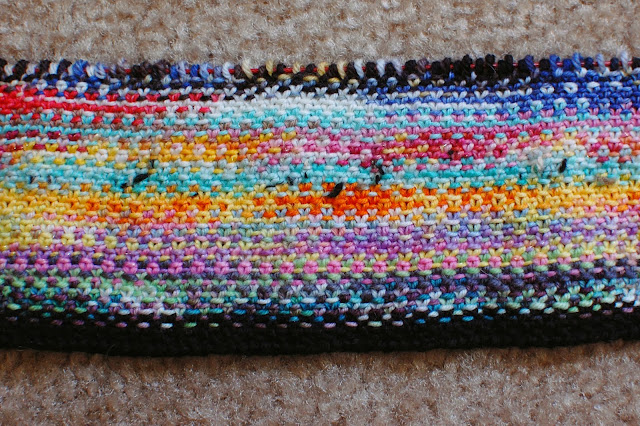 It looks a little crazy, but it's really fun to have a project where I have very little control over the colors and don't know yet how it will look when it's finished.

And just in time for the cooler weather and the arrival of pumpkin-flavored everything, the fall mini skein shipment arrived: 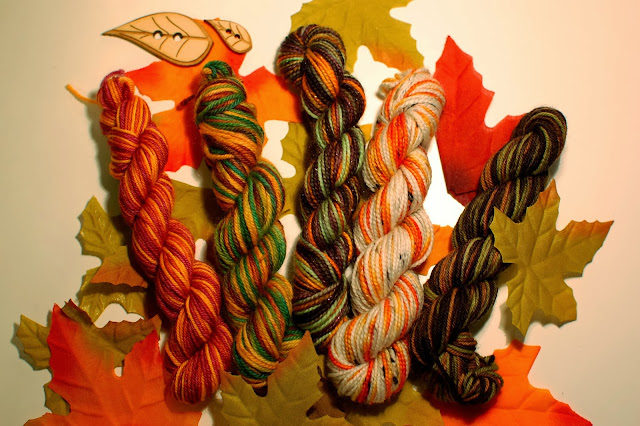 I'm looking forward to adding them to my scarf!