I would like to think that the urge to knit cozies for inanimate objects is a compulsion that most, maybe all, yarn-hobby-people feel and that some are better than others at stifling. I don't have any desire to make cozies for my tissue boxes or tea pots (not that I have tea pots) but for some reason, my i-devices all seem to need little socks to wear. And why not - they are always appreciative and can wear their garments no matter the season. My first knitting project, after graduating from scarves, was my iPod cozy, and it was definitely worth it no matter how questionable the idea of an iPod cozy may be to sane people. It taught me to use magic loop and Judy's magic cast on, and since I hope to tackle socks someday soon, I think it was probably good practice.

It also prepared me to successfully tackle my first winging-it, patternless knitting project: an iPad cozy, of course. Really, it's just a bigger version of the iPod cozy, but I'm pretty proud of it, mostly because it's awesome: 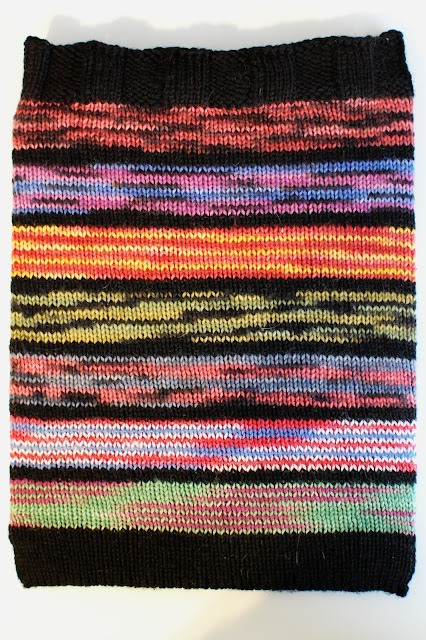 And it's awesome because it's Avengers! From the bottom up, it's Hulk, Captain America, Thor, Loki, Iron Man, Hawkeye, and Black Widow. The movie was the highlight of my early summer, so when I heard from a Knit 1 Geek 2 podcast that GnomeAcres was selling an Avengers mini-skein collection, I knew that I had no choice.

I bought it before I had any idea what to do with it, which is unusual for me - I like to at least pretend I know why I'm getting any yarn that I buy - but then I realized my iPad was looking pretty naked and as soon as the Ravellenics were over, I started on the cozy.

Not only am I pleased with my iPad's cute little sock, but I'm so happy to have discovered GnomeAcres. Amanda is great and her yarn is beautiful, to my eyes and to my nerdy brain. I already bought some more, a skein of Naruto that is destined for my first pair of socks. How convenient that Amanda has a Socktober KAL planned!
at 4:01 PM