I have been on a frogging spree! By which I mean I've frogged two active projects in the past week - so maybe not quite a spree, but much more than normal for me. First to meet its demise was my Zilver shawl in Miss Babs sock yarn. 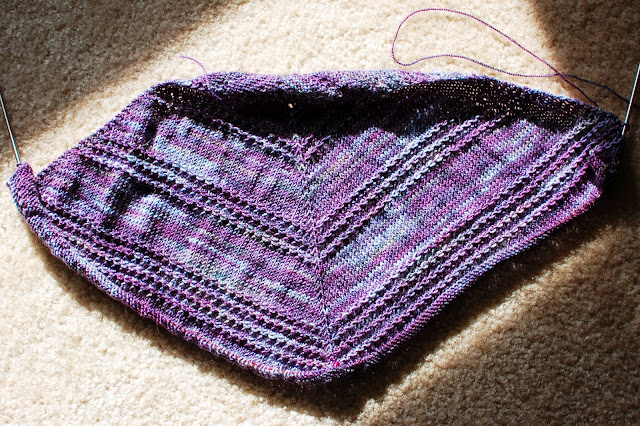 Back in July, I said that I wasn't quite sure how I felt about this colorway. Although I love the individual colors, the way it was pooling in Zilver left patches of sad blue-grey and moldy brown-green that looked nothing like what I had hoped for when I bought it and had it wound up. I kept going for a while to see if my opinion would improve, but then I realized I was more excited about the idea of frogging the shawl than I was about finishing it. So, rip rip rip.

(I was also not happy with the way the top of the shawl wants to curl in, as you can see in the picture. I don't think blocking would fully eliminate that, so while I would like to try this pattern again with a more tonal yarn, I might see if I can alter the construction a bit.) 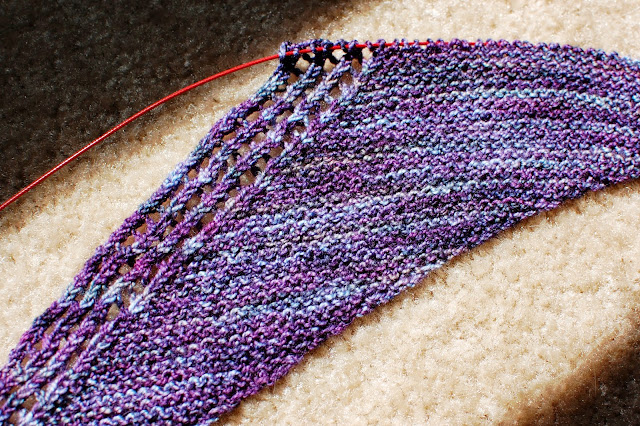 Now I'm trying the same yarn again with Martina Behm's Trillian pattern, and so far I'm liking it much better. The garter stitch helps to blend the colors together and break up some of the blobbier pools, so it looks more harmonious and pretty. I don't have as much yarn as the pattern calls for, but I'll just go until I run out.


The next frogging victim was a sock I was knitting at work. We recently started carrying Alegria, a wool/nylon sock yarn from Manos del Uruguay, and I was really excited to start some socks with it. I was also really excited to try one of the patterns in the new Unofficial Harry Potter Knits magazine, so I started the Herbology Socks. Yes, I was trying a lacey, cabley pattern with an intensely variegated and colorful yarn. Yes, I know better. I got about halfway down the first leg before I admitted that neither the yarn nor the pattern were doing each other justice. So goodbye for now, Herbology Socks.

Instead, I'm thinking of trying Anne Campbell's Show-off Stranded Socks, or a similar pattern meant to complement a variegated yarn rather than fighting with it. Lesson learned (again)!
at 8:55 PM