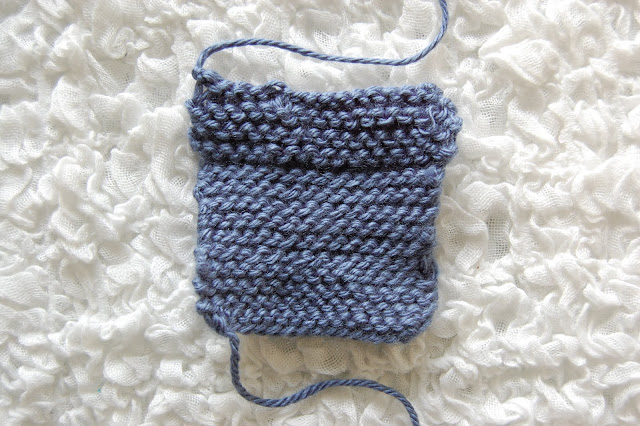 Yes, knitting. I am doing it. Sort of. As you can probably tell by the picture, until one week ago I had never knit a stitch in my life. That was my first attempt to practice "what I had learned," not just figuring out the actual steps. I knit until I decided I was bored of that, then I purled until I decided I was bored of this ugly scrap altogether. 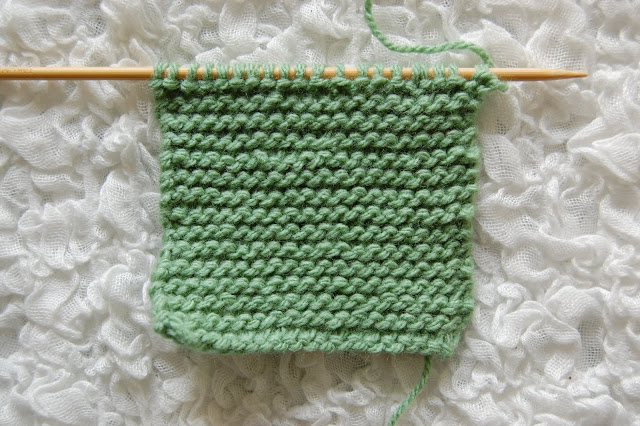 This is what I produced when I decided I was done practicing randomly, and would now "make a swatch of garter stitch." Obviously it's still far from perfect, but it's a little less appalling than the one in blue. I've also been working on a little square of seed stitch, which has gone better.

Along with the Teach Yourself Visually Knitting book, I have intently studied the How to Knit and Purl Continental Style For Dummies video on YouTube. Even back before I caved and and started learning, I had decided that if I ever learned to knit, I would do it continental style. A friend of mine knits that way, and I think it just looks nicer in her hands. Also, as a crocheter of three and a half years, I liked the idea of continuing to hold the yarn in my normal yarn-hand. But more than anything, I am stubborn. If I'm going to do something that everybody else does, I'm at least going to do it in a slightly less common way.

I feel a little sheepish that I have to give up my identity, among my small circle of people who do crafty things, as "the crocheter that has no idea how to knit." It seems like everyone either can knit but not crochet, or learned to crochet but forgot how. I, meanwhile, perversely enjoyed telling people who saw me crocheting and assumed I was knitting that I had NO IDEA how to knit, since knitting and crocheting are clearly NOT the same thing. Kind of like how I was really pleased by the fact that I only knew how to play bass, not guitar, because they are NOT the same (bass is better) (so is crochet). But anyway, now that I have finally admitted to myself that there are plenty of knitted things that I would like to make, damned if I am not going to at least learn continental style exclusively.
at 10:09 PM