I love listening to the Commuter Knitter podcast because Jen is full of great ideas. Not only did she inspire me to start watching The Big Bang Theory and to weigh my FOs and stash, she also thought of a new segment for her podcast where she revisits her older FOs and reports on how they're doing. I love the idea, and I want to do something similar here, since I've been crocheting for several years longer than I've been blogging. So, I plan to spend a few days each month showing you the crocheted and knitted objects I finished during that month in previous years. If I already blogged about it, I'll just post a quick update, but if it's a project from before 2011, then I'll also do a little review of the pattern and the process of making it, like I usually do with my project posts.

In 2008 and 2009, I was still almost exclusively an amigurumi-maker, so from those years I have a bunch of little critters to show you: The baby dragon was a birthday present for my sister in 2008. I don't remember whether he lives with her now or if he stayed home with our parents, but the last time I saw him he was in the company of some other crocheted buddies I made, so I imagine he's doing well. I loved making that pattern (Baby Snow Dragon by Marjorie Jones), and in fact I made three other dragons with it. For a new crocheter, it was great, because it was pretty simple to figure out but felt excitingly complex with all those little pieces and that cute shaped face.

The elephant (2008) and fox (2009) were little gifts for friends that I haven't been in touch with, so I don't know how they're doing! The fox is another great amigurumi pattern (Fox Amigurumi by Nimoe), again pretty simple but with nice results. The little elephant (Pocket Elephant by Brigitte Read) was more challenging to figure out, especially when I was still a beginner. There are other lil' elephant patterns that I would probably suggest over that one. And the heart (2009) is not really a critter, although I did consider giving it eyes. It sits on my shelf of amigurumi, kind of tucked behind everyone else because I don't really know what to do with it! If I were making the pattern again today, I would probably go ahead and give it a face, and/or stuff it with catnip for my kitty. The pattern (Corazoncitos by Mia Zamora Johnson) has instructions for three different sizes, so there's a lot of possibilities there (maybe a mobile, or Valentine's Day decorations?).

Speaking of Valentine's Day, my one crocheted FO from 2011 was my card that I made for my boyfriend: 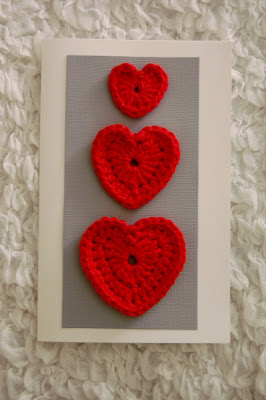 This pattern is by June Gilbank and it's another heart pattern that includes three sizes. I made all three, then used invisible (clear plastic) sewing thread to stitch them onto a piece of gray cardstock, which I then attached to a white card I had made. My boyfriend still has this card stashed somewhere.

Since this post is already a little long, I'll save a couple things for later: one of my absolute favorite projects I've ever done, plus checking back on the things I already blogged about.
at 6:45 PM