This is my third and last FO Flashback post for February. In this one I'm looking back at the projects I made during the time that I've been writing this blog, and giving a little update on how they're being used (or not) these days.

First, I want to mention that February is my knitting anniversary month! It was in February of 2011, after years of believing that I was going to be a crochet-only person for life, that I got myself some needles and learned to knit and purl. My early efforts are immortalized in this post. 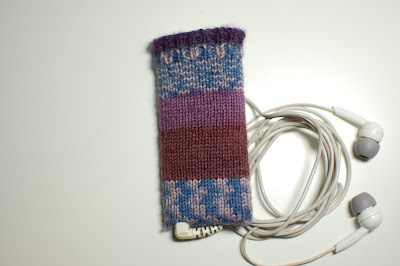 In February of 2012, my only knitted FO was my cozy for my iPod, which I blogged about here. At the time, my iPod was living in my work bag, and it wore its little sweater every day for months. The cozy did a good job of keeping my iPod cushioned and scratch-free, although it was a little annoying to have to scrunch it down whenever I wanted to see the screen or use the volume control. Now my iPod lives in my desk drawer, and hangs out in there naked, because of the aforementioned annoyance. If I take it outside with me, though, I still put its cozy back on. That picture was just taken today, so as you can see, it's held up pretty well. 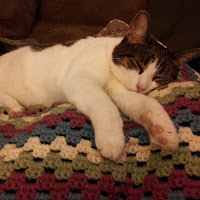 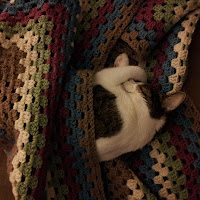 I finished my granny afghan on the same day as the iPod cozy. I love this blanket so much more than I thought I would, when I first started it just to use up a bunch of stashed acrylic! It's been living on the couch permanently since the weather got cold, and the best part about it is how much my cat loves it. We didn't even have a cat when I made it, so that's a nice surprise! The only problem is that it has some little threads pulled up from her getting her claws caught in it, but since it was just a quick and simple stash-buster, I'm not (too) upset. 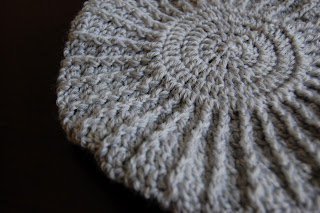 And finally, the Phannie hat. My sister requested this... and then moved to Texas a few months later. So, I don't think it's gotten a whole lot of use. She is wearing it in one of her profile pictures, though, so at least I get to see it when I chat with her. I did like making it, and it gave me the confidence to make a couple more hats last year.
at 11:00 AM