I would like to knit more for other people, now that I feel a little more confident in my abilities and have more than enough accessories for myself (for now!). So, I've been looking through the projects I like on Ravelry and the yarn at my LYS and trying to think of what would appeal to people I know. I've been wanting to make A Grey Loop for a while and it looked like something my sister might enjoy, so I showed the pattern pictures to her over Christmas and she seemed to like it. 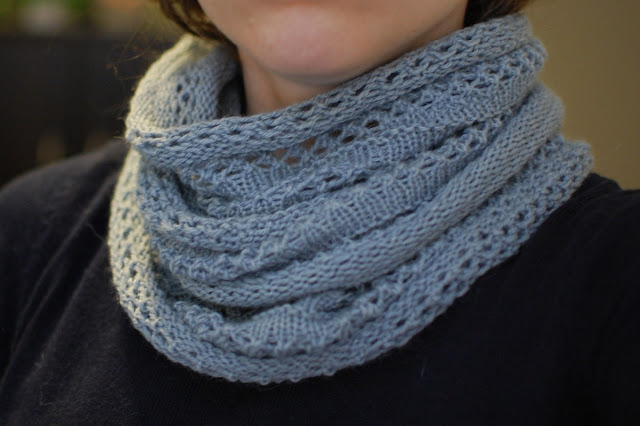 I made it for her birthday, but unfortunately it ended up being even less of a surprise for her than it already was, because I convinced myself it was awful and sent her pictures of it first to make sure she really wanted it.

What happened was, it turned out at least six inches longer than I wanted or expected. This is my fault, because I was using a different yarn and needle and instead of being responsible and making (and blocking) a gauge swatch, I just guesstimated how many extra stitches I would add to what the pattern called for. The messed-up result should not be surprising to anyone, but it was to me, when I finished blocking it and put it on and felt like it was hanging down to my knees. My first thought was IT IS RUINED and I immediately began plotting to rip apart the whole thing and at least try to salvage the yarn. After sleeping on it, I came to my senses and checked with my sister first, and she liked the pictures and loves the cowl.

So much for my confidence in my abilities.

I think part of my problem is that I had a bit of a rough time with this project from the start. The pattern contains "a mistake of epic proportions" (in the words of the pattern writer!) and instead of correcting that mistake, she just kind of suggested a few fixes. That threw me off a little, and I ended up just using another Raveler's modifications as my pattern. I also can't say that it's 100% mistake-free (I never can say that, but I always want to).

But really, now that it's done and with my sister, I feel pretty good about it. And it doesn't hurt that I love the yarn - it's Canopy Fingering by The Fibre Company, and it's so soft and pretty. And I got it on sale at my LYS for 40% off! So of course, I bought a couple skeins for myself too, in a different colorway. I'm thinking I might use some of that for the Glorious Cabled Mitts pattern that I've had queued forever, but now it occurs to me that I might have enough for a small shawl... hm...
at 2:26 PM