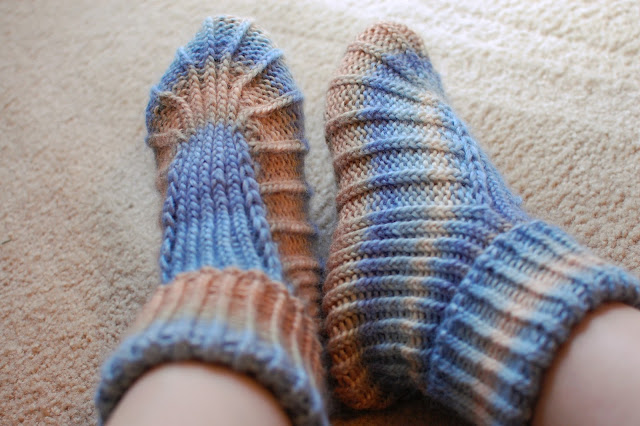 My other holiday-vacation-knitting project was a pair of slippers for myself. A quick and easy knit with a pretty end result, right? This is true, in theory. By the time I was on to the second slipper (which was actually the third slipper I attempted), it was indeed quick and easy and pretty and took only a few hours of work. But, just for my own amusement/torture, I'll list out all the steps that finally led up to these slippers existing:


Now that I'm finally on Step 15, I do really like these slippers. They are warmer and cozier than regular socks, but snugglier than regular slippers. Mine did turn out a bit too big, despite making the small size, but they're not unwearable. I would definitely like to make these again, using a less bulky yarn to get the sizing right. I think they'd make nice gifts, too. And I'm reasonably confident that I could make another pair very quickly and easily at this point.