Happy Donut Day, everyone! I hope you have something sweet to enjoy today, donut or otherwise.

I thought it might be fun to share some donutty goodness here, so for today's Donut Day, I'll talk a little bit about my donut experiences in Japan. Whenever I travel, I try to hit up 1) yarn stores and 2) donut shops, and while I didn't find much yarn I wanted to buy in Japan, I more than made up for it in donuts. 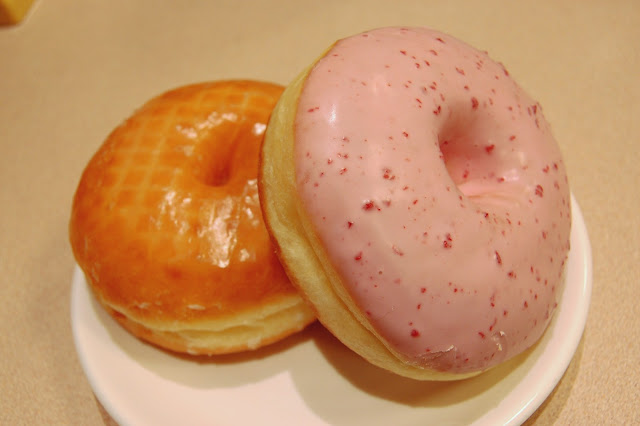 I had heard of Mister Donut before traveling to Japan, and based on the name alone, I put it on my list of essential places to visit. According to Wikipedia, Mister Donut was founded in the States, and its U.S. locations later turned into Dunkin' Donuts. It's been the main donut chain in Japan since the 1970s (check out their very thorough history on their website - I used Google Translate).

We went to Mister Donut a couple of times, and the donuts were pretty good. They were less sweet and dense than the donuts I'm used to, and a little smaller. The pink glaze in the picture is strawberry, and is the same creamy coating that seems to be on all Japanese strawberry-flavored treats. If you like a less intense donut, you would probably enjoy these. I didn't sample the "pon de ring" donut that they are famous for, but maybe next time.


We also made a stop at the Shinjuku location of Doughnut Plant, the New York-based specialty donut store. On our trip to New York in 2010, we made a pilgrimage to the Doughnut Plant store on the Lower East Side, only to find that it was closed on Mondays. I was sad. Fortunately, the shop in Shinjuku was open when we found it. We got a green tea flavored donut to sample, and I have to say, I wasn't that impressed. Maybe green tea flavor doesn't work that well as donut glaze. I also found the donut itself a little too solid and cakey (I like yeast-y donuts best). I do think Doughnut Plant is worth a try, but after two years of anticipation, it didn't live up to my hopes. 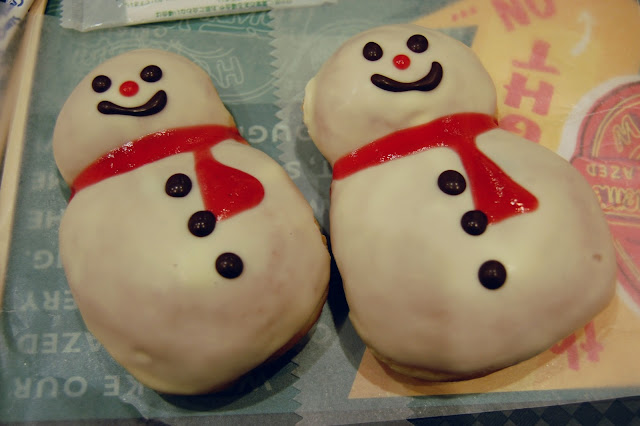 I'm embarrassed to admit that my favorite donuts in Japan came from Krispy Kreme. I can get Krispy Kreme right here in the States! But, I don't know, not only did the donuts seem a little tastier, but the experience of being in the stores was nicer, too. I don't spend a lot of time in Krispy Kreme stores here, and when I do, I kind of feel like I'm the only person there. I guess in America, donut stores are more for picking up a dozen on your way to work than for sitting and enjoying a treat. The Krispy Kreme stores that we went to in Tokyo always had lots of people in them, though (part of this, I'm sure, is that there are just many more people in Tokyo in the first place). It was nice to be with lots of other people also enjoying their donuts.

By chance, our hotel was very close to the Shinjuku Krispy Kreme, so we ate a lot of donuts. Donut day, every day (it was okay because we were walking several miles each day, right?). Part of the appeal was that they were selling their special Christmas donuts, and could you resist that adorable snowman, especially if you walked past him every time you went to or from the train station? He was delicious and filled with chocolate cream. So, so good.


One place we didn't get to on this trip was Floresta. They are known for using natural ingredients in their donuts, and for making the adorable cat-shaped donuts that the Internet discovered a couple years ago. I spotted one of their stores in Kyoto from the bus window, but that was as close as we came. If we make it back to Japan, Floresta will be at the top of my donut list.

I hope you enjoyed my Japanese donuts mini-review! The next Donut Day is two weeks from today and I'll have another donut topic to chat about.
at 10:30 AM