On Saturday, I went to my first-ever yarn event, the Pittsburgh Knit and Crochet Festival. And... I'm already excited for next year's! Since this was my first time going to something like this, I mostly just visited the market. I'd like to take classes next time (the ones that sounded interesting to me were already full when I registered this year) and maybe spend more time just hanging out. In addition to doing some shopping, I did get to meet Stacey of FreshStitches and Emily of the Whatcha Swatchin podcast, so that was fun. And of course, seeing so much beautiful yarn in one place, both for sale and made into things that the attendees were wearing, was a great reason in itself to go.


Speaking of beautiful yarn... I did some stash enhancement at the market, of course. I had some Christmas cash I was  still hanging on to, so I took that to be my spending limit/goal. I knew I definitely wanted some SpaceCadet Creations yarn, so I went to that booth right away. I've been attracted to yellowy-pink yarn lately (maybe I'm ready for spring) so this is perfect. Plus, sparkles!


I also visited Ball and Skein's booth. They have so many beautiful colors of yarn that it took me several visits and a long internal debate to decide on the skein I wanted. I saw a lot of other people doing the same thing as me, standing there with two or three different colors and trying to pick between them. In the end, I got a skein of their Glissade yarn (a fingering weight 50% silk, 50% merino blend) in Elderberry. I was trying to avoid getting more purple since I always gravitate to purple, but this is such a beautiful color that I had to have it. 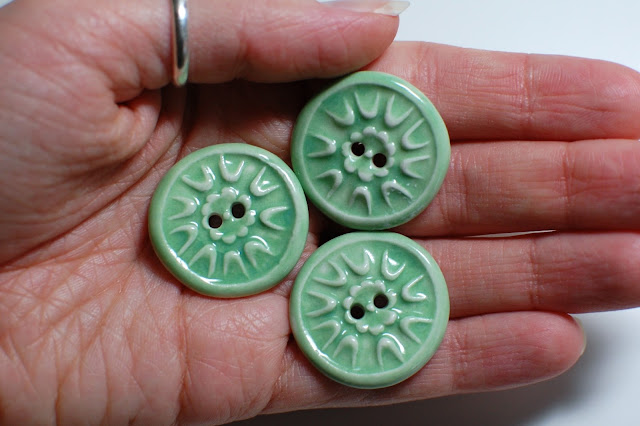 I also found a few non-yarn things that I needed. First, these hand-made buttons by Melissa Jean. No idea what I'll do with them, but they're pretty just to look at even if I never come up with a project. 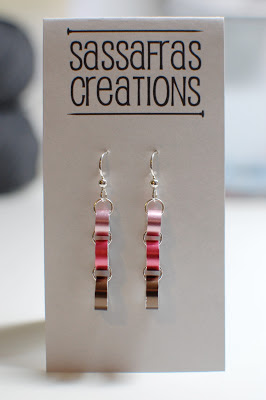 And, a pair of earrings made from knitting needles by Sassafras Creations. This is the kind of upcycled jewelry I like. If you don't know that it's made from recycled knitting needles, then it just looks like interesting beads, but if you do know its story, then it's something extra to enjoy about them.

I'm really glad I was able to go to the festival, and as I said, I'm already looking forward to the next one. And maybe I'll get to go to another festival before then - I'd like to go to some of the bigger ones soon!
at 1:00 PM